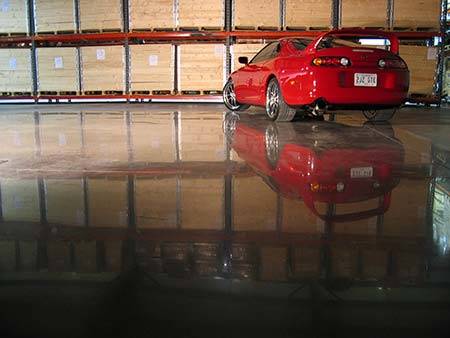 At Safe Dry Terrazzo Restoration we have honed our concrete polishing to an art. Whether you need a satin finish or a high gloss shine we have the products and the machines to do the job right. Polished concrete is the wave of the future do to its low maintenance cost and green flooring status. Polished concrete can be maintained with water using no chemicals. At Safe Dry Terrazzo Restoration we will work hard to meet your every industrial and residential need. We are Retro Plate certified installers and have the training and experience to get the job done right. Give us a call today and set up an on-site inspection and demo. We also do Floor PREP. We can remove coatings coverings and leave your floor ready for any installation.

Take a Closer Look at our Work in Action

See Some of our Latest Work

Is a Polished Floor Slippery?

Flooring systems used on industrial, commercial, and residential terrazzo floors should provide a safe walking surface in both wet and dry conditions. By measuring the coefficient of friction (COF), a quantitative number can be used to express the degree of slip resistance of a floor surface.

These figures are consistent with a typical terrazzo restoration done with HTC equipment and diamond tooling. When the coefficient of friction is measured from a resting position, it is called the “static coefficient of friction” (SCOF). When it is measured when the surfaces are in relative motion, it is called the “dynamic coefficient of friction”. Measuring the dynamic COF is difficult and requires a strict laboratory environment for accurate results. The James Machine would be used in this situation under the ASTM D-2047 standard. Almost all portable and laboratory meters measure only the static COF and most measuring devices (slip meters) refer to static COF based off the ASTM C1028 standard. The Sellmeier slip test meter measures both Static and Dynamic coefficient and provides a digital printout and audit trail.

The higher the SCOF, the less slippery the surface. It is possible to have too high a SCOF; the surface can be too slip resistant and difficult to walk on. The American Society for Testing and Materials (ASTM) initially set a standard of 0.50 or higher for polished surfaces. Because the required friction for normal walking is significantly below that figure (as measured on the James Machine), a coefficient of 0.35 is sufficient. The Occupational Safety and Health Administration (OSHA) will only recommend that you try to achieve a 0.50 SCOF for flat surfaces. In short, there really is no set standard that anyone will stand behind. Plus, all of the standards were tested using natural stone and liquid protectants / coatings. So we have to group ourselves in with this category until they do testing for polished concrete.

How Does Safe Dry Exceed Your Expectations

Safe Dry has taken the time to train and grow, so we have the knowledge to tackle every job

We do all the work at Safe Dry Terrazzo Restoration and do not hire any subcontractors or subcontract any work out.

We are an IICRC Certified Firm. That means we have been trained and conform to the guidelines of the IICRC

The company owner spent 23 years in the US Army and understands how important standards are to any company.

Safe Dry has spent much time studying and applying proper terrazzo restoration techniques. We have tested hundreds of systems in order to know we will produce the best looking floors possible.

We use HTC tools and equipment on our jobs. HTC is the leader in the polishing equipment field.

This award is given to less than five percent of the superior rated companies on Angie’s List. We are proud to display our Angie’s List Super Service Award for 2009 on our web site. Every company will tell you they are the best. At Safe Dry we strive to be the very best terrazzo restoration company. Just saying you are the best is meaningless. At Safe Dry we work hard to get the job done right so our customers will say we are the best. We have an A rating with Angie’s List. Please give us a call so we can prove to you that we will give you the best job possible.

Check out TerrazzoRestorationBlog.com Safe Dry Terrazzo Restoration’s blog is the most comprehensive terrazzo restoration website in the world.

Proper terrazzo repair takes years to learn. If you have ever seen a repair in terrazzo
flooring that used white epoxy and colored markers or paint you know what we are
talking about. At Safe Dry Terrazzo Restoration we color match epoxy to your terrazzo floor. We never use markers or paint. We carry over seventy colors and sizes of rocks to get the best match possible. Check out the holes, marked using a pen as a pointer, on our blog site. Click on the image to the right to go to our blog site.